Yogyakarta's Adisucipto International Airport , 8km east of town, is a small but busy mostly-domestic hub. There are frequent (every two hour) connections on Garuda, the national airline, to Jakarta (50 minutes) and 2-3 times a day (60min) to Denpasar, while other domestic airlines service both Jakarta and Denpasar, as well as major cities in Java,Sumatra, Kalimantan and Sulawesi. For international services, AirAsia connects Yogyakarta to both Kuala Lumpur and Singapore while Malaysia Airlines flies between Yogyakarta and Kuala Lumpur. Silkair and Tigerair also flies from Singapore.

There is a tourist information desk, ATM and taxi stand in the arrival hall. Official airport taxis are available for around IDR50,000 depending on your destination, pay at the taxi desk in arrival terminal and then head for the official taxi rank. Give the receipt to your driver, there is no need for any additional payment.

Yogyakarta airport is one of the two rail-connected airport in Indonesia, beside Kuala Namu in Medan, North Sumatera. Those arriving from (and departing into) the airport can take a Prambanan Ekspres regional train to/from Kutoarjo (west of Yogyakarta), Palur (just east of Surakarta) and several stations in between, including Tugu (just off Malioboro Street in Yogyakarta) and Solobalapan station at Solo. The station at the airport is just a few minutes walk from the terminal, with an air-conditioned underpass leading all the way to the platform for trains into Yogyakarta.

The main bus station is Giwangan, 4km to the southeast of the centre. There are regular services throughout the island, including Jakarta (12 hours), Bandung (10 hours), and Surabaya (8 hours).

There is also a bus station inside the airport which is part of the Trans Jogja Busway System. From there you can get to any one of the many bus stations in their system.

If you are going north, to Borobudur temple or Semarang for example, head to Jombor terminal located just above the northern Ringroad.

If you are planning to come to Yogyakarta from Bandung then you need to go to Cicaheum Terminal in Bandung to get bus. If direct bus is not available then take bus to Purwokerto (6-7h). From Purwokerto there are regular buses available for Yogyakarta (4-5h). Direct bus Bandung - Yogyakarta is available 24/7, both regular (every hour) or night bus that depart at 15:00 from Bandung.

Since Yogyakarta is in close proximity to Semarang and Solo, there's also a shuttle bus that operates between these cities, called Joglosemar (Jogja-Solo-Semarang).

Trains to Jakarta take between 7-12h from the main Yogyakarta station, commonly called Tugu Station. The Argo-class trains (Argo Lawu , Taksaka and Argo Dwipangga) are the best of the lot being the most comfortable and fastest (c. 8 hours).  These express services connect Yogyakarta and Jakarta in 7-8 hours, either at daytime or overnight. Price and schedules are available online. The line between Kroya and Prupuk, where the railway crosses the main backbone mountains of Java, is scenic.

Passengers to/from Bandung should take the Argo Wilis or Lodaya expresses which traverse a scenic part of Java during daylight hours, with rice fields and mountains (although there is an overnight Lodaya and the Turangga from Surabaya also travels overnight.

Passengers to Surabaya are served by the twice-daily Sancaka service departing in the morning and afternoon.

Yogyakarta and Solo are connected by several Prambanan Ekspres trains. Despite the name, the train does not stop at Prambanan station, and even if it does make an unscheduled stop, the station is rather far from the temple complex of Prambanan. The Prambanan Ekspres does stop at Maguwo station (for the airport) making it easy for travellers to change modes.

Yogyakarta is immediately accessible by car. Jalur Selatan (i.e South Line), which stretches through the southern part of Java (practically from Bandung to Surabaya) passes through Yogyakarta. The city lies approximately 380 kms east of Bandung and 300 kms southwest of Surabaya.

From Jakarta however, through journey via South Line is possible and common, visitors usually prefer traveling through Jalur Pantura (Jalur Pantai Utara, i.e North Coast Line). From Semarang, 110 km away, go south, and you will enter Yogyakata from the north. Traveling through the north cuts the distance by a few tens of kilometers, the roads are wider, and there are more facilities (eateries, accommodations, gas stations) along the way compared to the South Line. However, Jalur Pantura is more crowded since there are plenty of trucks and long distance buses along the way, and particularly in the peak seasons (long holiday), it is usually heavily congested. 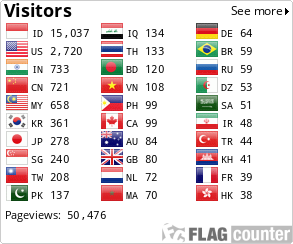